The final afternoon of my quick 2 1/2 day weekend in Colombia included a hike up Bogota's highest peak, a boisterous celebration at the top with new friends, and lowering a trio of older women down a wall to escape a locked gate.  Sound unbelievable?


Fortunately, the day did NOT include any more attempted muggings at knife point (click here for a link to "Bogota, Pt 4: In Harm's Way," and a reminder that everything turned out okay on Sunday night). On a side note, Garth's Blog readers with decidedly polarized opinions of my earlier antics may not be won over with this adventure, either.  Judge for yourselves.

Laughing at the local music video channel with my friends over Monday morning breakfast doesn't just sound culturally insensitive.  It was.  Ezra, Fancy, Carla, and everyone else in our hostel loft tried in vain to block out the TV's eye-popping inanity as we planned out the upcoming day.  For my take on the Musicology Hostel, check out my previous post, Bogota, Pt.5: Risky Business and the Musicology Hostel (link).

Knocking out all day Sunday with the harrowing events of "In Harm's Way" pushed my moonlight Mount Monserrate hike back to a daylight hike on Monday. Even more disappointingly, well researched plans to hike through the Chicaque region before flying back to the U.S. that day had to be scrapped entirely. 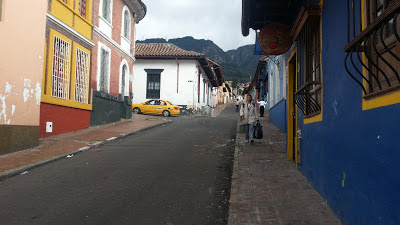 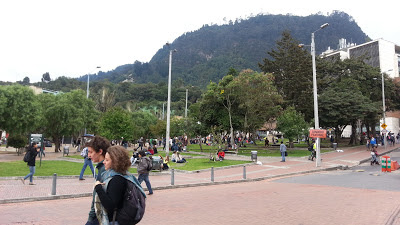 I should have known better than to make a second feeble attempt at a solo exploration. No less than four separate groups of wonderful friends from two different hostels bumped into me during the crosstown jaunt to Mount Monserrate. The diversions were energizing but also ate up a large chunk of daylight. Love those people, though!


After lunch, one of these friends walked with me to the base of Monserrate but was deterred by the its modest height. We said goodbye at the trailhead so I could start running up to the peak. 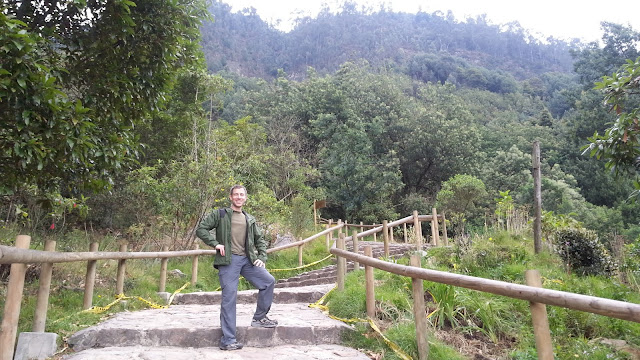 The lung-busting altitude occasionally slowed my cobblestone trail run down to a brisk walk. Meeting fellow hikers on the way up also compelled me to slow down to match their pace as we chatted en espanol. Most foot traffic was heading downhill, though, due to the popularity of the funicular and cable cars that tempted visitors to bypass the uphill hike. 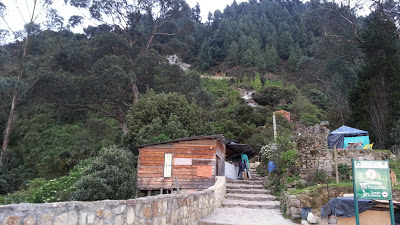 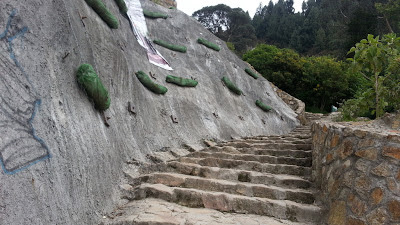 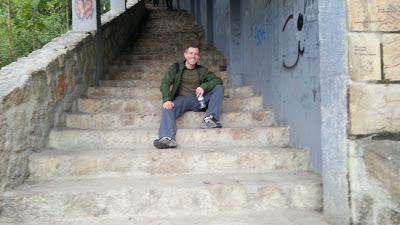 At times, the trail run seemed more like a cobblestone stair run.  Even the tamest sections were accommodated by, you guessed it, more stairs.  And many sections of these stairs were quite oversized.  Only on the downhill return run was it possible to lunge far enough to soar over an extra giant stair or two with a single leap (there were also sections of normal-sized stairs). 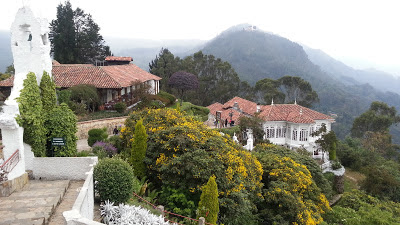 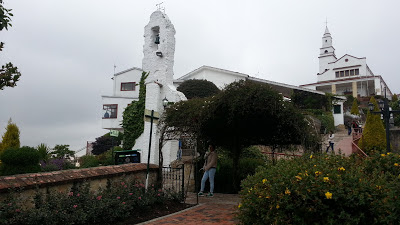 At 3,152 metres (10,341 feet) above sea level, the peak's panoramic views of Bogota and the surrounding mountains were stunning. The white 17th century chapel at the top was closed at that hour, but two restaurants and a snack bar served to remind visitors that this pilgrimage was also a tourist attraction. The warm empanadas and pastel de pollo paired perfectly with the hot cocoa.

Please note:  Cocoa was consumed, not coca. We've made it this far into my Colombia travelogue without a single joke about the C-word, A.K.A. Colombia's most infamous and unfortunate export. Why ruin this streak of cocaine-free blogging restraint now?

For whatever reason, my stealthily makeshift (though not recommended) route to the top of Monserrate earlier had drawn the attention of several camera snapping tourists. Don't worry, nothing life-risking happened here. But climbing up over the ledge drew mixed reactions, many of them admittedly gratifying.  It was a relief to see amused expressions even on the guards' faces.

After that edgy (pardon the pun) entrance, excited strangers inexplicably lined up for me to be photographed with them. And with their girlfriends. And with various attendees of a gigantic South American Herbalife convention. And even with some lady's kid.  Maybe they thought I was somebody else? 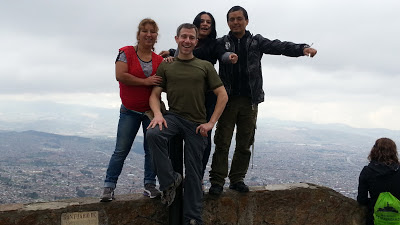 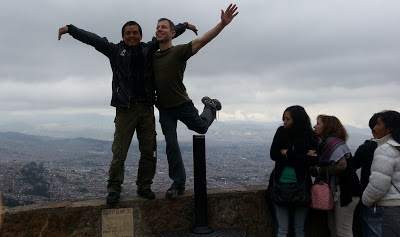 Someone from the crowd snapped a few pics with my own cell phone (a couple photos are included above). Let's hope that the more outlandish photos will surface someday.  If any of you Monserrate hikers from Monday are reading this, please send some of those crazy pics my way!

Lingering for so long with my new friends at the top of Monserrate led to a downhill sprint to beat the closing of the gates. Determined to avoid buying a ticket for the cable car, I started running down the trail. It was too late.

Note: This probably goes without saying, but the following is yet another example of inadvisable behavior.  Rounding a blind corner, I nearly trampled a few older ladies who were stopped, panicking, in the middle of the trail. A gate was blocking their descent.  Making the time-consuming hike back up to the cable car at the top would've been the proper thing to do, of course.  But it was improbable that, in their physical condition, they could still catch the last ride down anyway.

I hurdled myself over the protective wall on the side of the trail and hopped down to the ground.  It was barely more than a 10 foot drop, so I offered a hand to the trio of stunned ladies above. Reluctantly at first, they accepted my assistance and began to swing each of their legs over the wall.

Reaching up, I lowered the first two ladies down to the ground. The third lady's clothes got snagged on something.  She took quite a while to free herself.  At this point, we were all laughing at the absurdity of our dilemma.


After lowering everyone safely to the ground, I walked around the gate and hopped up the other side. Pulling the ladies back up over the wall was much easier to coordinate.  With the locked gate behind us, I ran ahead to scout out the remaining gates below. The women would have few problems bypassing them.


I tore the rest of the way down the trail, slowing down only to visit with a local boy and some Spanish speaking maintenance workers who were calling it quits for the day.

Feeling especially hyperactive, I continued running from the base of Monserrate and into the heart of the city.

Saying goodbye to my new friends (and making newer friends) at the Musicology Hostel took quite a while. Many of us will be meeting up again.  A couple of friendly U.K. backpackers even "booked" me as a guide for a Mount St. Helens climb in June!


Significant setbacks tripped up the jog back into town, the bus to the Bogota airport, and finally an unplanned taxi ride. Suffice it to say that nearly every word in my meager Spanish vocabulary was put to the test in a heated, um, discussion about excessive fees.

None of that mattered. Just after midnight on Tuesday, my Delta 767-400 left Bogota for New York. The familiar tunes of Matt Kearney and Mumford & Sons quietly flowed from the speakers in the Business Elite cabin. I was headed home!


The next leg of the vacation would begin in a few days, starting in Switzerland.  Would I be able to convince Kathy and Lena to come along with me to Europe?

Coming next on BlogSpot...

Two domestic "intermission" posts with the family, beginning with the wedding of the year in Sunriver!

And then we continue our story in...

Posted by Garth Hamilton at 5:55 PM

Beautiful scenery! I'm wondering...what are those big green cylinder-shaped items attached to the wall in picture #6 ? They look like body bags, but surely they aren't. Please tell me they aren't!

That trail was nowhere near the guerrilla-controlled regions of Colombia, so no body bags were necessary ;)

I'm thinking that they functioned as catches to prevent hikers from being beaned by falling rocks. Or maybe they're trying to save a few bucks on burial costs?

Is there a trail all the way to the top? Or did you have to "create" a trail?

Yes, the trail to the top was very easy and well-maintained, even for trail runners like me. But there were also alternate routes for scrambling, and unsanctioned paths to continue the climb into a neighboring hill.

In this post, I was referring to a barely climbable stone wall to reach the top that made for an unnecessarily risky entrance. That's what caused all the hubbub and camera flashes.

HI, i am in Bogota now and planning to climb there. I do run but not frequently, will it be okay? how many hours did it take you to climb, anyway?

If you haven't climbed to the top yet, Joy, I would definitely recommend it. Without the side trips (which I hypocritically discourage, for ecological reasons), the hike to the top should take no longer than one hour. And that's walking at a leisurely pace.

I would imagine that the summit could be reached in about 20-30 minutes with a light, but persistent, jog. Sorry about my late response. Have fun!

Garth Hamilton
Beaverton, Oregon, United States
Garth's Blog is a select compilation of my adventures in world travel, ministry, outdoor pursuits, culture, and most importantly-- family! I will never seek to make money from this blog...it's all about entertaining readers and sharing about our exhilarating life journey!